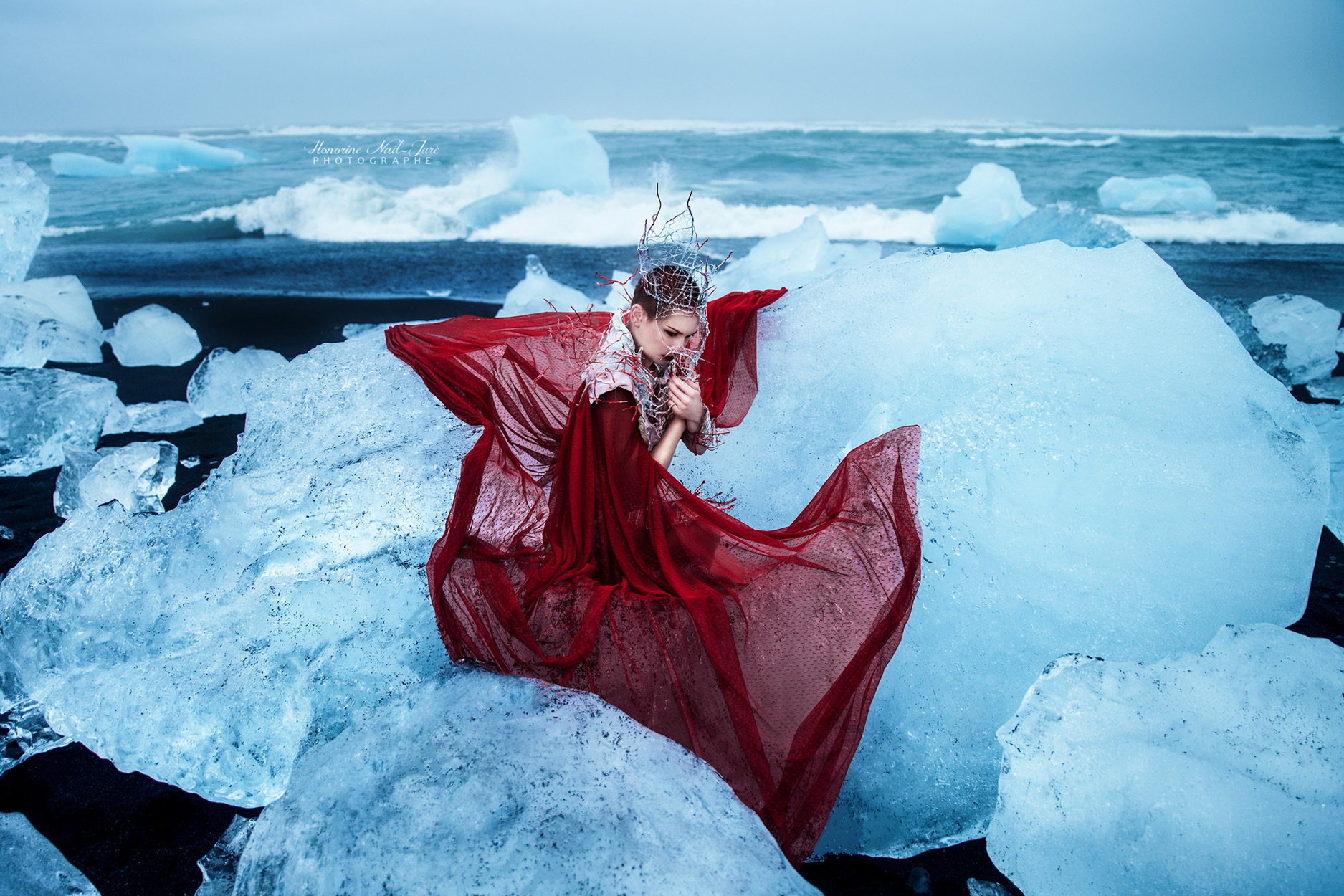 While observing climate evolutions for many decades, we have noticed that the Arctic and Antarctic melting ice caps are significantly speeding up. When reading analyses from many studies, we noticed, for instance, that the glaciation level of both poles had been the lowest ever registered.

Global warming bring about major consequences such as reduction of glaciers area, the melting of icecap, the recoil of ice floe and icebergs disappearance.

In order to broach this first subject of our Essence of Life project, our volunteers’ team chose to go to Island in autumn 2017.

16 volunteers (photographers, dancers, a video maker, models, a costume designer and a make-up designer) went to this magnificent island to approach the major problem of melting glaciers in an artistic way.

This phenomenon has speeded up for the last decades. The figures describing the reality are staggering. An awareness of individuals is necessary and each person can participate in the collective effort allowing acting for environment.

Global warming bring about major consequences such as reduction of glaciers area, the melting of icecap, the recoil of ice floe and icebergs disappearance.

The Arctic ice floe has reached numbers of ice melting according to the National Snow and Ice Data Center (NSIDC). It melted by 49 % in 2012, or 3.3 million of square meters.

The thickness of glaciers is going down: the Alps have lost 1/3 of their area since 1950.

The average temperature of the planet keeps rising. The first 6 months of the year 2016 have been the hottest months, observed for 140 years.

The satellites are one of the tools allowing us to observe the planet’s health. Each month, satellite data particularly observes the Arctic and the Antarctic. The last data was very worrying, even alarming. The glaciations level observed in November 2016 on both continents have been the lowest level ever observed until now. In those regions, ice melts during summer needs to rebuild in winter with the lower temperatures. This phenomenon is completely normal. However, for many years, ice has been melting faster and faster during summer and rebuilding slower and slower during low temperature periods.

The Antarctic is warming four times faster than the rest of the planet. Based on studied led in 2012, the Weather Underground declares that, according to measures taken from Marambio (a scientific research station based in the Antarctic on Seymour Island, to the northern point of the continent).

The Antarctic continent got warmed four times faster than the rest of the planet between 1900 and 2011. A dramatic temperature rising which accelerates glaciers melting and disappearing of penguins colonies.

During the first semester 2016, the Arctic ice floe has registered tremendous melting. From now on, there are real concerns regarding its capacity to weather global warming.

Walt Meier, an expert in this area in Nasa Goddard Space Flight Center of Greenbelt (United-States) declared that along the years, we had observed that the oldest glaciers tend to disappear from the ice floe. This phenomenon raises the collective concern because the oldest ice are therefore the thickest, thus the strongest.

A study published in 2014; the review « Science »; clearly identified the main responsible of ice melting: Human. Humans could be responsible for 2/3 of this phenomenon which has been increasing for the last 25 years.

Since 1993 the entry of satellite monitoring has indicated a raise of 3 cm from 1993 to 2003. Both phenomenons are responsible for the rise of this level: